Amira Alsareinye descends from two cultural backgrounds, Syrian and Mexican, while she was born and raised in San Antonio. She graduated from the University of the Incarnate with a  B.A. in biology in 2014. Amira paints with watercolors and acrylics and she also enjoys creative writing and poetry. In 2014 she moved from San Antonio, to Dallas, where she married and had three children. While she dedicates most of her time in the occupation of motherhood, she creates artwork focused on women, and imagination.

Her artwork was featured in the San Antonio express newspaper in 2014 at an interfaith art show. Her recent work “love lilies” was featured in March online (due to covid) at the envision art gallery show entitled essence. The vivid colors and intricate designs reflect traces of both her cultures which are very important to her identity. 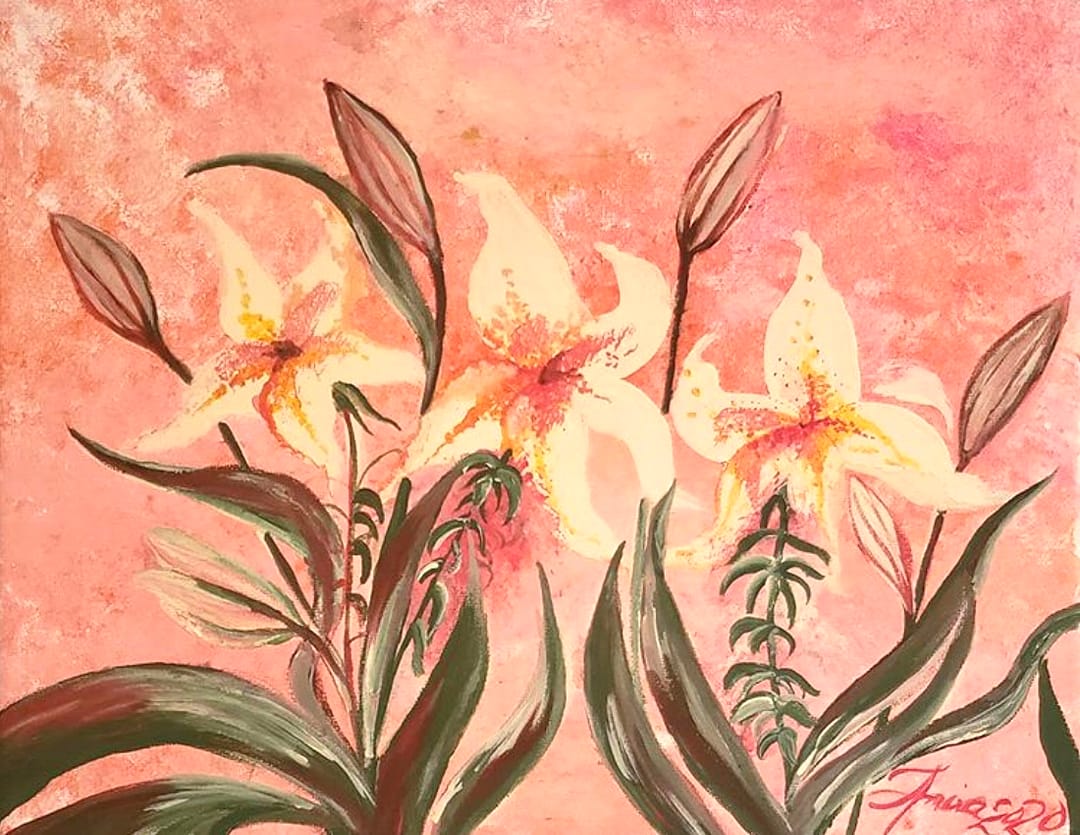 Tell us about your current work.

I am currently strengthening my skills in portraiture and digital drawing,  in order to better represent certain images in my weird surrealistic art. I say weird because that’s what it is, you see I have quite an odd process that starts with memory.

I, myself am a biology major, and have always been obsessed with the brain. There is a process called involuntary semantic memory, which may involve the culmination of different informational memories together appearing randomly in the mind’s eye, including text, smell, images, etc. These “visions” as I call them usually occur while performing a mundane task. And motherhood is well equipped with those. I will provide a scenario, a real one, once I was driving my car (I know right dangerous timing!) And suddenly this image of my spine and skull with blooming flowers and some sort of paisley design sprouting from the last of the seven cervical bones. I was at a red-light, and when it changed to green, I quickly took away my focus from my mind onto the road. When I see one of these “visions” while doing something requiring less attention I can focus on my mind and sometimes bend the images I see adding and subtracting to them, to create a first imaginary draft. Later when I find time, I will create a sketch, or sometimes dive in completely beginning my creation.

What influences your work?

Dalí, Frida [Kahlo], I mean they influence everyone. There are a few other surrealists, some who are less known like María Izquierdo, a Mexican painter who created beautiful surreal art and others who are a little more well known, like Remedios Varos, who’s surrealism delved into magical worlds.  Aside from other artists, I am deeply inspired by nature, anatomy, and life experiences.

How have parts of your identity (gender, race, heritage, family, personality etc) impacted your artwork?

I am half Arab (Syrian) half Latina (Mexican) and I was born and raised in Texas. I always felt like an odd puzzle piece that couldn’t find the right space. Little by little as I grew up, I discovered that I am allowed to be different.  Even though I didn’t have many friends growing up I knew that there was a place for me, but I often stayed very quiet and said little about my identity. Until I started wearing hijab, then people began to assume my identity for me, and I was forced to speak my truth. I am both Arab and Mexican, I can’t choose, can’t change and I don’t want to. I love both sides of my heritage, and recently painted a self portrait using very bright colors and sunflowers like many Mexican paintings, while also maintaining a determined look on my face with a hijab draped around. There are so many stereotypical paintings of women in hijab, either with oversexualized looks, or with overly traditional patriarchal enforced activity i.e. women carrying jugs on their heads. This time of representation is so beautiful and I intend to take full advantage and represent myself accurately.

What role has being female played in your creative life?

Even in childhood I often drew women, in fact I rarely ever drew men, it might be a weakness in my skill (not sure yet) or it could be because, of something someone told me at an art show I was in, “my work is surrounded by feminine energy, it is mostly concerned with the female.” I never realized it before that day, and even after I hadn’t realized what this person had meant, until I really looked at my portfolio and noticed, she was right. And I realized my infatuation with the female form as an artist. My work is imbibed with floral escapes and feminine figures across a cosmic plane.

Tell us about a moment that affirmed to you that you were meant to live a creative life.

Since childhood, the things that made me most happy were creative, I often found myself drawing, and painting, and continued into my college years even though art wasn’t my major. Then shortly after I became a mom was a life revaluation point, dedicate my entire life to my children and leave myself empty (quick hint it’s not possible) or be a mom and make time for myself, which is obviously what I chose after falling into depression by choosing the first option. Ever since I chose this creative, messy, no structure combined with motherhood, life for myself, I have been creating more and more art and I have been a lot happier too.

Do you come from a creative family?

My mother taught me how to draw as a child, it was a very important hobby of mine.

What are you really proud of about yourself?

I’m proud that I had the courage to make time for what I love despite life being very busy.

What work would you make if you were not restricted by money, space or time?

I have always wanted to try my hand at pottery or glass blowing, I looked online, kilns run about $900, and I’m a total klutz so I dont think I’d make my own (too scared I’d burn my house down).

What would you tell your 10 year old self?

To never stop drawing. Which I didn’t anyways, I would draw for hours. But mostly that I am loved.

Amira would love you to take a look at the work of these artists:

All Artwork and images on this page are copyright of Amira Alsareinye.